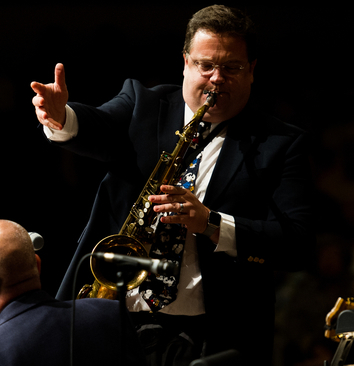 The Stardust Memories Big Band is the culmination of a life-long dream for Craig. His earliest musical influences came from his father, who frequently played big band records.

Even before Craig played an instrument, he imagined himself playing the solo saxophone and clarinet parts he heard on records by Benny Goodman, Artie Shaw, Glenn Miller, Tommy Dorsey, and many other Big Band greats.

Craig graduated from the University of Miami, with a double major in Jazz Performance and Music Business, and is one of South Florida’s most in-demand woodwind performers and studio musicians. He performs with many touring Broadway shows which have included Wicked, Spamalot, Anything Goes, Billy Elliot, Chicago, Hairspray and many others, and with international celebrities including Johnny Mathis, Bernadette Peters, Frankie Valli, the Four Tops, and the Temptations. Locally, he has performed with the Naples Philharmonic, the Southwest Florida Symphony, the Charlotte Symphony, the Naples Jazz Orchestra, in the pit at Sugden Theater for The Naples Players, and many others.

Musically, Craig's first love is the sound of the big band, specifically the classics from The Golden Age of The Big Bands ('30s, '40s and '50s). It is our sincere desire that you enjoy listening to us recreate these classics as much as we love playing them!